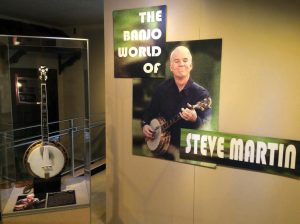 American Banjo Museum’s newest exhibit, The Banjo World of Steve Martin, provides a look at the musical side of one of America’s favorite entertainers. The exhibit, which features banjos from Martin’s private collection, opens February 15th at the American Banjo Museum in Oklahoma City’s historic Bricktown district.

Best known for films such as The Jerk, The Pink Panther and, most recently, the animated feature Home, as well as numerous written works, Martin has become an American entertainment institution. However, few people are truly familiar with his musical prowess. From his earliest years as an entertainer, Steve Martin has been using his skill as a banjo player as part of his “Wild and Crazy Guy” persona. Recently, his career has returned to its musical roots, resulting in award winning and critically acclaimed recordings, concerts and theatrical presentations.

Steve Martin is unquestionably the most influential recent figure in making the banjo not only acceptable, but a welcome and in demand instrument in American popular music culture,” said Johnny Baier, executive director of the American Banjo Museum. “His recordings, concerts and televised appearances - including the annual presentation of the Steve Martin Prize for Excellence in Banjo and Bluegrass, have exposed millions of people to the banjo in the most positive and musical manner possible.

In addition to memorabilia and rare photos, The Banjo World of Steve Martin features an exclusive interview where Martin discusses his love for America’s instrument, the banjo. “Many of these items have not been seen before by the public. We are honored to present this one-of-a-kind exhibit, which is a ‘must see’ for anyone who loves music, comedy, movies - and Steve Martin,” said Baier.

Since reemerging on the music scene in 2001, Martin has garnered praise and awards for his music. In 2001, he shared a Grammy award with Earl Scruggs for the re-release of Scruggs' iconic Foggy Mountain Breakdown. In 2009 Martin release his first all-music album, The Crow: New Songs for the 5-String Banjo, also making his first appearance at the Grand Ole Opry later that year.In 2013, Steve Martin teamed with singer/songwriter Edie Brickell on the album, Love Has Come For You, earning that year's Grammy Award for Best American Roots Song for the album’s title track. The duo released a second collaboration late last year called So Familiar and also joined creative forces on the critically acclaimed musical, Bright Star, which is set to open on Broadway in March.

At the American Banjo Museum, the artistry that goes into crafting highly ornate instruments and the skill and talent that goes into playing them is on full display.

Your ticket for the: Special Exhibit: The Banjo World of Steve Martin