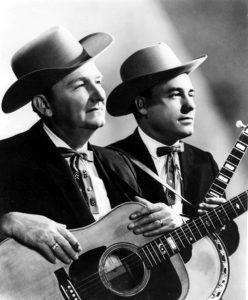 No matter what type of banjo or banjo music may be your preference, very few would argue the fact that Earl Scruggs is the name with which the public and musician alike have most closely associated with the banjo during the past half of a century. From his earliest days as an aspiring banjoist in Shelby, North Carolina to his 1945 debut at the Grand Ole Opry with Bill Monroe which quite literally defined Bluegrass music, Earl Scruggs was a unique and excitingly innovate banjo player. His unspeakable technique coupled with an inventive musical mind which never lost sight of its roots, continued to establish new standards in the world of Bluegrass music until his passing in 2012.

At the height of both his musical powers as well as commercial popularity as half of Bluegrass music’s most revered pairing – Flatt and Scruggs,Earl Scruggs became a household name as a result of Flatt and Scruggs recording the theme song to the The Beverly Hillbillies in the early 1962 – a status which was only further bolstered by their seven appearances on the show itself. Although never seen on the screen, the duo’s musical soundtrack for the 1967 blockbuster film, Bonnie and Clyde, established Scruggs’ Foggy Mountain Breakdown as the unofficial anthem of the five-string banjo. In the 1970s, Scruggs – ever the innovator, continued to break new musical ground as he took the banjo to unexplored territory as the leader of The Earl Scruggs Revue. As Porter Wagner said put it, “Earl is to the five-string banjo what Babe Ruth was to baseball. He is the best there ever was and the best there ever will be.”

During his long career, Earl Scruggs owned dozens of banjos, from the most modest examples which were gifted to him by adoring fans to the ultimate opulence of the gold and silver plated, engraved and hand-painted Gibson “The Earl” model introduced in 2002. Of all of those banjos however, Scruggs was closely identified with only a few. Most notable among these are the 1934 Gibson RB-11 which was Scruggs’ first banjo; the fabled 1930 Gibson Granada which was his primary performing and recording instrument from 1949 until his death, and; the one-of-a-kind custom DeLuxe Vega banjo which was a predecessor to the company’s line of four Earl Scruggs Model banjos in the 1960s.

Shrewdly managed by his wife, Louise, Earl Scruggs’ career regularly capitalized on his name recognition in the banjo world, often seeing the “Earl Scruggs” name associated with instruments and accessories. After Gibson – focusing their promotional efforts in the popular music world – declined Earl and Louise’s proposal of the introduction of an Earl Scruggs Model banjo in the late 1950s, Scruggs was introduced to Bill Nelson, the owner of the Vega banjo company of Boston. Although best known as an iconic jazz age manufacturer of four-string tenor and plectrum banjos, Vega fared better than most banjo makers in the 1950s with their introduction of new instruments to match the then current trends in folk and country music. With their Pete Seeger Model– introduced in 1958 – already a hit, in 1960 Bill Nelson seized the opportunity to establish a relationship with the singular banjoist who might further the company’s potential in the country music market…Earl Scruggs. The result was what could only be described as a unique banjo – even by the Vega standards (which were known resulting in some very special banjos).

The Earl Scruggs Deluxe five-string banjo made for Scruggs by Vega in 1960 bore more of a resemblance to their ultra fancy tenor and plectrum banjos than the austere five-string banjos typically associated with folk and country musicians. The banjo sported engraved and gold plated metal parts, engraved mother of pearl position markers on the fingerboard and, most notably, a thin sidewall resonator elaborately decorated in the manner of the company’s venerated Vox IV model. Of particular note is the inclusion of a pair of early Scruggs’ designed cam “D Tuners” in the center of the peghead. As this installation impeded upon the “Vega” branding in its typical location, the company adapted by placing a metal “Vega” branded metal plate (identical to those fastened to the exterior of Vega banjo cases) near the top of the peghead to facilitate their brand recognition.

Following the presentation to Scruggs of his own unique “Earl Scruggs Model,” Vega rolled out the production line model with its simple yet functional decorative elements. With Earl’s promotion – including a memorable live commercial/performance on the game show The Price Is Right, the Vega “Earl Scruggs Model” became a best seller in the company’s product line, ultimately resulting in four different variations and price points. During the period of his endorsement of Vega banjos (which lasted until 1970), Scruggs was often seen and photographed with his Vega banjo. It appeared on numerous Vega promotional items, in press photos of Flatt and Scruggs, on the LP album cover Songs of the Famous Carter Family and, most notably, in the iconic studio portrait of Lester Flatt and Earl Scruggs taken in 1962.

With all of this attention and exposure, the public would surmise that his Vega was Earl Scruggs’ favorite banjo. Those in the know, however, knew differently. Although the company touted the model as “being made to Earl Scruggs’ specifications” and truly is a fine instrument, the model simply didn’t live up to what Earl wanted as a musician. As a result, he often retreated to his Gibson Granada for most of his live, radio and recording performances, while dutifully utilizing his Vega for promotions and certain television appearances. In time he played his Gibson exclusively but carried his Vega on his tour bus – purposely fitted with a broken head. When banjo geeks would inquire about the Vega, Earl would show it to them and comment, “The head broke so I had to play my Gibson tonight…”

As his role as an iconic elder statesman of the banjo took hold in the 1970s and beyond, many devotees speculated as to the whereabouts of Earl’s iconic banjos. Of course his Gibson Granada stayed with him until his sad passing in 2012 and is now on display at the Country Music Hall of Fame. Although rumored sightings of his first Gibson RB-11 have been numerous, nobody knows what really happened to that particular banjo. And then there is his Vega… Over the years speculation has run rampant in banjo collecting circles regarding the whereabouts of that unique and historic instrument. With no definitive answer forthcoming from Earl or the Scruggs family, most assumed the instrument had traded hands and was safely, yet sadly, ensconced in an unknown private collection to be out of public view forever.

Then, to the surprise of almost everyone, in January it was announced that instruments from the estate of Earl Scruggs would be offered for sale at Gruhn Guitars in Nashville. The excitement among the banjo and bluegrass community was incredible in the days prior to the sale as collectors and players alike either gushed – or remained protectively silent – regarding the Earl Scruggs instrument they hoped to acquire. Of considerable interest among the numerous relatively modern Gibson “Earl Scruggs” models and other less significant banjos and guitars listed was Earl’s iconic one-of-a-kind Vega DeLuxe banjo. Banjo chat rooms buzzed about that particular instrument with numerous comments alluding to “second mortgages,” “winning the lottery,” and “raiding the kid’s college fund” being bantered about as a mean’s of its acquisition. Additionally, based on modern day Scruggs’ fans having only seen the banjo in 1960s era black and white photos, its appearance in the Gruhn sale marked the first time Earl’s Vega banjo was seen “in color” for many.

Based on the press attention and buyer anticipation of the sale, when Gruhn opened for business at 9AM on January 27th virtually everything from the Scruggs’ estate was sold within a couple of hours. Because of their relatively high price points, both Earl’s personal Gibson “The Earl” model as well as his special Vega banjo lingered a bit longer. After considering the historic significance of and provenance attached to Earl’s Vega DeLuxe banjo being a match to their mission, the board of the American Banjo Museum voted to acquire the instrument to be part of its permanent collection. As a result, Earl Scruggs’ fans and devotees may now see – “in color” – this very unique and significant piece of American banjo history.

Your ticket for the: Earl Scruggs banjo acquired by ABM