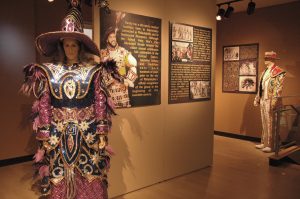 An exciting new exhibit, Philadelphia Mummers – Struttin’ Their Stuff – is now open at the American Banjo Museum in Oklahoma City’s historic Bricktown district. Showcasing the music, history and flamboyant costumes that have been the trademarks of the Mummers for over 100 years, this unique exhibit brings the spirit of New Year’s Day in Philadelphia to America’s heartland.

The Mummers Parade – held in Philadelphia on January 1st each year since 1901 – is recognized as the longest continuously running folk festival in America. Although Mummer roots go back to Greek mythology and English theater of the 1300s, it was the immigration melting pot of Philadelphia, which melded music, masquerade and camaraderie into the city’s unique Mummer culture. When Mummer celebrations of the past began including firearms as noisemakers as well as chaotic revelry, the city incorporated the Mummers into their annual New Year’s Day parade – and the tradition began.

The banjo’s role in the Mummer hierarchy goes back to introduction of a String Band division to the parade in the early 1900s. Dressed in elaborate costumes and playing banjos and saxophones – all while doing the distinctive Mummer’s Strut, the String Bands are the most popular and populated of the five Mummer divisions. While early costumes were homemade, a modern Mummer String Band spends between $30,000 and $80,000 annually for themed costumes designed to be more elaborate and breathtaking than the year before.

Philadelphia Mummers – Struttin’ Their Stuff includes many of those dazzling and colorful costumes ranging from sequin bejeweled clowns and jesters to a kid friendly and sparkling version of Frankenstein. Pairing costumes with rare vintage photos, an interesting Mummer history and a video salute to Mummers through the years, the exhibit celebrates a one-of-a-kind American musical tradition.

The American Banjo Museum is pleased to have partnered with Christian Vincent Lawlor – a longtime member of Philadelphia’s Fralinger String Band – in bringing this special chapter of banjo history to Oklahoma City. ABM executive director, Johnny Baier, comments, “As Mardi Gras is to New Orleans, the Mummers Parade is to Philadelphia.
We are very excited to have this chance to share the music, fun and eye candy which are the Mummers with our museum visitors.”

Philadelphia Mummers – Struttin’ Their Stuff – runs through April of 2019. For more information on upcoming events, or to become a member of the American Banjo Museum, visit americanbanjomuseum.com or call at (405) 604-2793.

Your ticket for the: American Banjo Museum Presents “Philadelphia’s Mummer’s – Struttin’ Their Stuff”