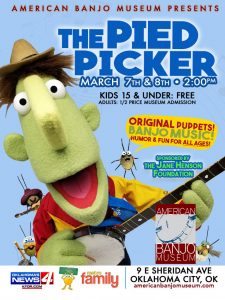 The American Banjo Museum will host David Stephens’ live, puppet-filled banjo show: “THE PIED PICKER!” Saturday, March 7th and Sunday March 8th at 2:00 p.m. This take on the classic children’s tale, “The Pied Piper,” is a one-man show telling the story about a banjo player who encounters a town with an influx of puppet roaches.

A recipient of a 2017 Jim Henson Foundation Family Grant, “The Pied Picker” is a 45-minute show featuring fun characters, original songs, and a post-show puppet demonstration. Stephens has worked as a professional puppeteer for over twenty years with his company All Hands Productions.

This program is sponsored by the Jane Henson Foundation. Heather Henson, daughter of Jim and Jane, is no stranger to the American Banjo Museum. Over recent years she, along with Karen Falk, of the Jim Henson Legacy, brought Kermit to OKC with the exhibit “Jim Henson Life and Legacy”- currently on extended display.

“David Stephens is an extraordinary multi-talented performer, sharing the joyful intersection of puppetry and music as celebrated in Jim Henson’s work,” Heather Henson stated. “My mother, Jane Henson, recognized David’s gifts early in his career, encouraging him along the way. She would be thrilled that the Jane Henson Foundation is able to support bringing David to the American Banjo Museum while Kermit the Frog is on display.”

Stephens is no stranger to the museum either, in 2018 when Jim Henson was inducted into the museum’s Hall of Fame, David, an accomplished banjo-player, was the one who picked and sang, “Rainbow Connection” for the ceremony.

“The Pied Picker” plays twice at the American Banjo Museum- located at 9 E. Sheridan Ave. in Oklahoma City: Saturday, March 7th at 2:00 pm, and Sunday, March 8th at 2:00 pm. This all-ages show is free for children fifteen years, and under. Adults are half-off daily admission to the museum.

Your ticket for the: Jim Henson Family Brings Puppet Show to ABM