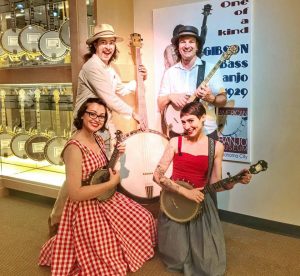 The smell of hotdogs, the sound of children laughing and the energy of live music filled the air during the inaugural Americana Fest event at the American Banjo Museum.

More than 200 people packed the American Banjo Museum during the June 18th event to hear bands on multiple stages. Local favorites Willow Way and Bread and Butter Band along with Memphis’ own Side Street Steppers had everyone clapping, singing and dancing throughout the day.

“It was an honor to be part of the American Banjo Museum’s inaugural Americana Fest,” said Jennifer Maynord of the band Willow Way. “The museum is truly something special. It was a pleasure and we look forward to supporting future ABM events.”

Outside the museum, families enjoyed hotdogs from Hot Dog OKC and snow cones from Kona Ice. There was a craft table where kids could decorate their own banjos and tambourines, made from paper plates and paint stirrers.

Our friends from the OKC Dodgers Baseball team brought one of their mascots, Brooklyn the Cow Dog, who mingled with guests and posed for photos. And, Rose State College’s Innovation Station brought their giant Lego set along with great information on their new branch located in downtown Oklahoma City.

The kids also had their own performers. Lucas Ross from KAUT-TV and our own Bill Bond took turns playing and singing songs with the kids on the outdoor stage.

Everyone in attendance had a chance to win great prizes during a free drawing. Winning festival goers walked away with a night’s stay at the Holiday Inn Express in Bricktown, gift certificates to the Bricktown Brewery, Bricktown Water Taxi passes, tickets to the Museum of Osteology, a yearlong family membership to the Oklahoma City Zoo, a gift certificate to the Painted Door in Bricktown, Exhibit C and, the grand prize, a brand new Deering Goodtime Banjo!

Americana Fest was made possible through the kind sponsorship of Fowler Auto Group, Downtown OKC, Inc., BancFirst, Bank of Oklahoma and KAUT-TV 43.

Your ticket for the: ABM Rings in Summer with Americana Fest