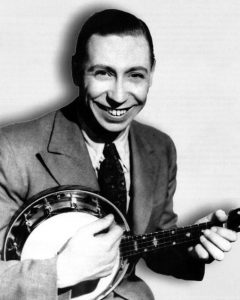 George Formby has been called a lot of things; movie star, ukulele banjo player, the biggest comedian in British history, England’s first pop star, he’s even considered by some to be a forebearer of punk rock. But all can agree, this toothy-grinned songster from Blackpool, England was larger than life.

Formby was known for this connection to the working-class in Britain. His “awe-shucks” persona and cheeky lyrics spoke to them in a way that other stars of the time didn’t. However, Formby himself was raised in a mansion by a wealthy father, who himself was a very successful musician. Toward the end of Formby’s father’s career, he was making what would amount to $58,000 a week in today’s market.

After his father’s death, Formby saw another performer who did an act impersonating his father. Formby thought that if someone else could make a living doing that, who better than he? Ironically, Formby had never actually seen his father’s act. Any time he tried, his father would send him away, saying, “we already have one idiot in this family.”

Early in his career, Formby met Beryl Ingham, who not only became his wife, but also his manager. She got him a haircut, and put him in a bespoke suit and changed his act, the result was a stellar career.

Formby made more than 20 movies between 1934 and 1946. Formby also released many hit singles, including;
“When I’m Cleaning Windows,” “Leaning on a Lamppost,” “With My Little Ukulele In My Hand” and “My Little Stick Of Blackpool Rock.”

In 1937, Formby was banned from the BBC airwaves for what censors considered indecent lyrics. And this was not Formby’s only run in with authority. During a tour of South-Africa he refused to play any venue that was segregated and stood up to pro-Apartheid politicians back home.

But, though it all, he was a smiling, strumming force of nature. His movies and music helped Britain smile a little during WWII, earning him the Order of the British Empire honors and earning him millions of fans, including the Beatles and Queen Elizabeth II.

Today an annual convention, in his hometown of Blackpool, hundreds of Formby fans meet to discuss his legacy, watch his films and play his songs on their ukulele banjos.

Inducted into the 2016 American Banjo Museum Hall of Fame.

Your ticket for the: George Formby – Comedian | Movie Star | Rebel