In the world of violins, the name Stradivarius is synonymous with the highest possible quality in construction, sound and playability. As such, when a Stradivari instrument comes on the market it is of great interest to musicians and collectors alike, commanding millions of dollars in the sale process. In the banjo world a counterpart to the legendary Stradivarius violins are the Mastertone banjos made by the Gibson company in Kalamazoo, Michigan prior to WWII. Because of their association with pioneers of Bluegrass such as Earl Scruggs, Don Reno, and Bill Keith – as well as contemporary banjo icons such as Bela Fleck and Steve Martin, vintage Gibson Mastertone banjos remain truly relevant and in high demand in the today’s musical marketplace.

The Mastertone designation was introduced by Gibson in the early 1920s and followed the company’s ever evolving line of professional banjos until production ceased in 2010 following a devastating flood at their Nashville factory. Although recently produced Gibson
banjos had materials and workmanship which often rivaled their iconic pre-WWII ancestors, players and collectors still gravitated toward vintage examples of the company’s work, often willing to pay well into five figures for the privilege of owning a functional piece of banjo history. For example, an original five-string Gibson Granada model made in 1933 recently changed hands for over $400,000.00.

In addition to their relevance in contemporary use of the banjo primarily in Bluegrass music, factors which determine the value of vintage Gibson Mastertone banjos include rarity, condition, association with prominent players and a mythical combination of the most desirable parts used at the time of construction. Although many Gibson Mastertone banjos look very similar, their age coupled with a the perfect mix of sound generating metal and wood components result in the difference between a $1,000 instrument common example and an exceedingly rare and valuable banjo treasure. In banjo collector parlance, a “flathead tone ring, one piece flange” (referring to an optimal combination of part) Gibson Mastertone banjo made before WWII ranks among the most desirable and expensive banjos being traded and played in the world today.

Even as banjo popularity waned in the 1930s from its peak of mainstream popularity during the Roaring 20s, Gibson forged ahead as though the “banjo boom” would go on forever, designing and introducing a completely new line of Mastertone banjos in 1937. Incorporating all the “right stuff” along with innovations such as a radiused fingerboard and a unique head tensioning system, the new Gibson Mastertone design brought to bear everything the company had learned about building banjos during the previous two decades. Known as “Top Tension” Mastertones because of the ability for the player to adjust head tension from the top side of the banjo rather than the back, Gibson had struck on a combination of parts, finish and design which many collectors and players consider to be their ultimate achievement. Sadly, as their introduction coincided with a new low in banjo popularity, very few top tension Gibson Mastertone banjos were produced prior to the company’s shift over to wartime production during WWII. 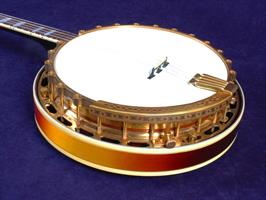 As with their earlier banjo designs, Gibson offered several variations of the top tension banjos, with the most expensive and elaborate model bearing the TB-18 designation. Constructed of highly figured maple wood and gold-plated and engraved metal parts, the TB-18 was Gibson’s successor to their fabled Granada model. In early 1940, the company manufactured one particular instrument out of the small number of TB-18s which were produced that found its new home with an owner who, for whatever reason, almost never played the instrument, ultimately putting it in storage for the next six decades. When that special time capsule of banjo history surfaced in the early 2000s, it created a quite a stir among the worldwide banjo collector’s community. However, in virtually new condition, each of several subsequent owners came to the conclusion that such a pristine example of Gibson’s finest work was simply too good to play.

Recently, that special Gibson TB-18 Mastertone banjo again came on the market and was brought to the attention of the American Banjo Museum in Oklahoma City. As instruments of this caliber typically reside in private collections around the world, rarely - if ever to be seen by the general public, the board of the museum determined the acquisition of that particular instrument to be a very important move in the fulfillment of the museum’s mission. As such, with donations from several board members and an advance from the museum’s reserve funds, that very special Gibson TB-18 banjo is now part of the collection of the American Banjo Museum.

In addition to its rarity and pristine condition, it is worthy of mention that recent years have seen actor, comedian and banjoist, Steve Martin regularly employing an almost identical Gibson style 18 banjo is his concerts and performances with the Steep Canyon Rangers.

Rarity? Check. Original condition? Check. Relevance to today’s music? Check. Association with a player of prominence? Check. This “holy grail” of collectible banjos is now on exhibit. If ever a perfect home for such an iconic example of the banjo making art existed, the American Banjo Museum is that place.

Your ticket for the: American Banjo Museum Makes Major Acquisition