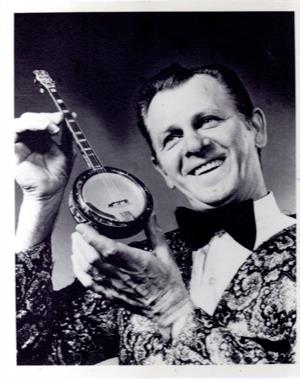 October is American Archives Month and museums across the nation are using this occasion to raise awareness about the value of archives and archivists.

As part of American Archives Month, the American Banjo Museum is giving you a peek into our archives with a short series of blog posts highlighting some of the odd and amazing items being preserved at the only banjo museum in the world.

A pipefitter and welder by trade, John W. Bruce was also a budding musician and model builder. And, in 1965 he brought his two hobbies together to make something rare and almost magical – the “Baby” Banjo, the smallest playable plectrum banjo in the world.

The construction of the Baby Banjo took Bruce more than a year to complete and, aside from the screws which he obtained from a local optometrist, he built the entire instrument himself.

Measuring just slightly more than 12” with a tiny banjo head of 3.5” in diameter, the Baby Banjo has 22 frets and nine pearl engraved inlays. Its maple bridge has an ebony inlay with ivory rests for the tiny strings.

With four miniscule ivory tuner pegs, the neck of the Baby Banjo is elaborately carved and the resonator is hand-painted with black inlaid bindings for trim and 40 rhinestones completing a colorful design.

The Baby Banjo was actually modeled on the full-size Vega Vox Banjo played by the legendary Eddie Peabody. In 1967, Bruce even received authorization from the Vega Instrument Co., Inc. to use “Vega” on his tiny banjo. The original letter from Vega also resides in the archives of the American Banjo Museum, along with a handwritten letter from Peabody himself to Bruce regarding the Baby Banjo.

The Baby Banjo is accompanied by a tiny banjo case with red felt lining and a padded swivel handle, also hand-made by Bruce.

Bruce used the instrument to entertain many needy and disabled children across his native Kentucky and, in 1970, he was made a Colonel by the State of Kentucky. Col. Bruce and his wife, Marian, eventually became a musical duo, billing themselves as, “Johnny-Banjo and His Lady Marian.” They eventually retired to Apopka, Florida.

Today, the Baby Banjo resides safely at the American Banjo Museum where it can be preserved for generations to come. 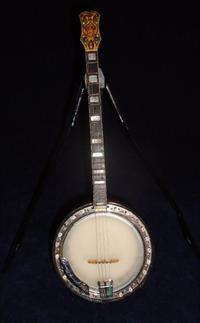 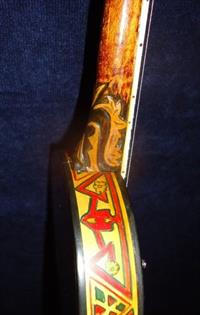 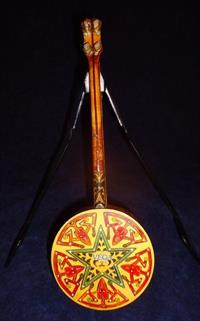 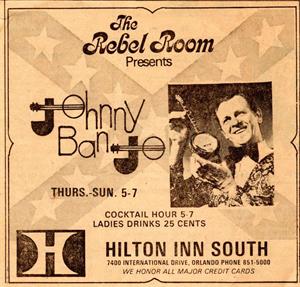 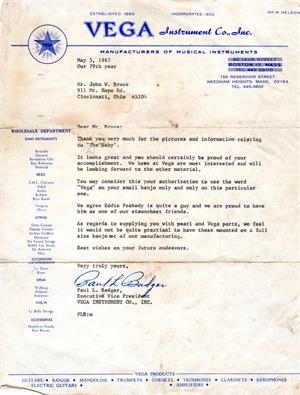 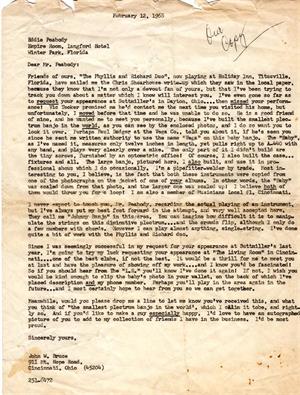 Your ticket for the: ABM Salutes American Archives Month