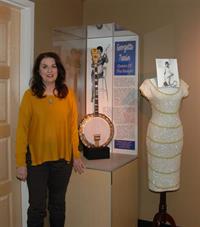 In 1951, 26-year-old Georgette Twain, an aspiring opera singer, was set to audition for the San Francisco Opera.  Raised by parents who were professionals in the theater, Twain’s own career was about to take off.
But, as she prepared for her audition, she noticed something was terribly wrong. Her left hand was knotted and she was having difficulty walking, and then, the unthinkable happened, she lost her voice. The young singer had contracted polio.

Robbed of her voice and her left side paralyzed, Twain was angry and in her own words, “hated the world.”  Rather than embarking on a singing career, she instead began the long road of physical therapy that would eventually help her regain the ability to walk and speak, but her dreams of a singing career were gone forever. With a love of music still intact, Twain’s father agreed to teach her to play his old banjo as part of her physical therapy. It was the banjo which would lead her back to a musical performance career that would span decades. Though she was unable to speak during her first television appearances, she ultimately did regain her voice. But more so, it was the way in which she made the strings of her banjo sing that would cement her place in musical history.

Twain became a student and friend of the great banjoist, Eddie Peabody, and in 1962 Variety magazine named her the “World’s Greatest Woman Banjo Player.” She went on to perform hundreds of shows in major entertainment venues and would often share the stage with show business legends such as Phyllis Diller, Lawrence Welk, Red Skelton, Carol Channing and Danny Thomas.

As the entertainment industry changed in the 1970s, Twain became a headline performer aboard luxury cruise ships, summing up her philosophy on life and career like this, “I learned that you can’t sit around feeling sorry for yourself. You’ve got to fight your own problems.” Sadly, Georgette Twain passed earlier this year.

During a private ceremony on November 18th her daughter, Cecilia Yale, graciously donated her mother’s beloved banjo, a 1962 Vega Vox IV, to the American Banjo Museum. Now on permanent display along with one of Twain’s stage costumes, this priceless artifact of banjo history will allow Twain to have an audience for generations yet to come. “We’re honored to have become the stewards of such an historically significant instrument,” said Johnny Baier, executive director, American Banjo Museum. “I had the pleasure of knowing Georgette Twain and am humbled to be able to share her story, her inspiration and her “musical voice” with our museum visitors.”