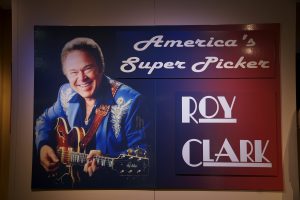 Taking the best from an impoverished childhood and developing innate talent into international superstardom, the life and career of the man known as America’s Super Picker, Roy Clark is celebrated in a new exhibit at the American Banjo Museum.

Born with music in his heart in Meherrin, Virginia in 1933, Roy Clark is best remembered and loved as the co-host of the long running television musical comedy program, Hee Haw. But before and since his nearly 400 episodes of “pickin’ and grinnin’” with Buck Owens, Clark’s life and career has taken many interesting twists and turns. His recent honor of being named Oklahoma’s Musical Ambassador for Children by the Oklahoma House of Representatives is reflective of Clark’s lifetime of milestones and accomplishments: Multiple Entertainer of the Year awards from both the CMA and ACM; Grammy winning hit recordings; Guest appearances on countless television programs – including frequent guest hosting duties on the Tonight Show starring Johnny Carson; Honors as the first country artist to appear in concert in the Soviet Union; and, countless tours, taking his music to his favorite place – the live performance stage.

Through his own words, artifacts of his career – including his very first guitar, and rare photographs from his personal collection, Roy Clark shares what only can be described as an amazing life and career in a new exhibit entitled, AMERICA’S SUPER PICKER – ROY CLARK opening March 15, 2017 at the American Banjo Museum. Scheduled to run through March of 2018, the exhibition chronicles the entire spectrum of Clark’s musical life - from his earliest musical exploits to performing with Brad Paisley on the nationally televised Country Music Association awards program in 2016.

Your ticket for the: America’s Super Picker Roy Clark