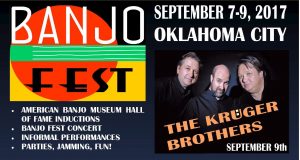 OKLAHOMA CITY (July 27, 2017) ─ During the weekend of Sept. 7th – 9th, the focus of the banjo world will be on Oklahoma City as the American Banjo Museum honors the 2017 inductees into the American Banjo Hall of Fame with three days of concerts, informal performances, parties, jams and other musical events called BANJO FEST!

This year’s American Banjo Museum Hall of Fame ceremonies will take place beginning at 6PM on Friday, September 8th at VAST located in Devon Tower. This formal event is open to the public and will include a reception, dinner and the Hall of Fame induction ceremonies. Musical performances by honorees John McEuen, Paul Erickson and Tony Trischka along with other celebrity guests will highlight the night. Along with the Hall of Fame inductions, the annual Jack Canine Award will be presented to internationally known banjo collector Jim Bollman. Canine, a major benefactor of the museum, chose this year’s recipient based on Bollman’s decades-long commitment to the preservation of the banjo’s colorful history.

Everything starts back up again at noon on Saturday, September 9th at the American Banjo Museum with performances by new HOF inductee, Paul Erickson, and four-time national banjo champion, Gary “Biscuit” Davis, as well as an historical presentation by noted banjo scholar and performer, Bob Carlin.

That evening the weekend comes to a crescendo with the second annual BANJO FEST Concert at 7PM at the Hudiburg Chevrolet Performing Arts Center at Rose State College in Midwest City. This year’s BANJO FEST concert will be headlined by the amazing Kruger Brothers. Internationally revered as purveyors of new American folk music, the Kruger Brothers take their audiences on a musical journey through the genres of bluegrass, folk, jazz, and classical music, all melded together into their own unique mix via virtuosic instrumental abilities and soulful vocals. Other BANJO FEST concert performers include Gary “Biscuit” Davis and the jazz Banjo Summit of Paul Erickson, Lance Dieckow and Johnny Baier. Following the concert, the BANJO FEST weekend is capped off with a post-concert afterglow party at the American Banjo Museum beginning at 10PM.

“Our museum and BANJO FEST celebration brings people from around the world to Oklahoma City,” said Baier. “During this special weekend, the world’s banjo spotlight is on our city.  As all of our BANJO FEST events are open to the public, it’s a great opportunity for Oklahoma City to show its support and rub shoulders with superstars of the banjo world.”

All BANJO FEST weekend events are open to the public.

For tickets, pricing and information regarding all BANJO FEST weekend events visit: www.banjofest2017.com or call 405-604-2793.

Your ticket for the: American Banjo Museum Announces BANJO FEST 2017 and Hall of Fame Inductees