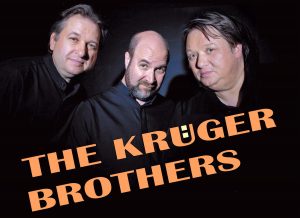 OKLAHOMA CITY (August 1, 2017) ─ The American Banjo Museum is proud to announce the return of the internationally renowned Kruger Brothers to Oklahoma as the headliners of this year’s BANJO FEST concert to be held at the Hudiburg Chevrolet Performing Arts Center at Rose State College in Midwest City on Saturday, September 9th.

Internationally revered as purveyors of new American folk music, the Kruger Brothers, take their audiences on a musical journey through the genres of bluegrass, folk, jazz, and classical music, all melded together into their own unique mix via virtuosic instrumental abilities and soulful vocals. Comprised of Jens Kruger (banjo, vocals), Uwe Kruger (guitar, lead vocals) and Joel Landsberg (bass, vocals), the Kruger Brothers have endeared themselves to many Oklahomans through their past appearances at the Oklahoma International Bluegrass Festival held each fall in Guthrie.

Originally from Switzerland, Jens Kruger began his banjo journey by practicing eight hours a day - when he should have been in school. As the love of music which he and brother, Uwe, shared began to blossom, the pair could be seen performing American folk and bluegrass music on the streets of cities throughout Europe. The duo signed their first record deal with CBS Records when Jens was only seventeen and, shortly thereafter, the brothers moved to America, settling in the heartland of their music, North Carolina. In 1995, a native New Yorker, Joel Landsberg, joined the band and the unique Kruger Brothers sound was born.

Mainstream popularity came to the Kruger Brothers in 2013 when Jens Kruger was awarded the Steve Martin Prize for Excellence in Banjo by Martin himself during a national appearance on the Late Show with David Letterman. Anxious to share with their audiences a seemingly endless array of exciting new compositions from the fertile musical mind of Jens Kruger, the Kruger Brother record and tour constantly, either as a trio or as guest artists with major symphony orchestras.

While each song which the Kruger Brother perform is unique and delightful in its own right, it is the effect of a full evening spent with the group which seems to affect audiences the most. As Ewe comments, “When I see people walk out of the theatre with a smile on their faces, I think, ‘well, we’ve done our job today.’ No one will ever come to me and say, ‘Uwe, I loved that solo you did in the third song!’ But they will come to me and say, ‘This was a wonderful evening.’ And then I am happy…that’s what I want to hear.”

Your ticket for the: KRUGER BROTHERS return to Oklahoma to headline BANJO FEST concert