OKLAHOMA CITY (August 24, 2017) ─ The American Banjo Museum is pleased to announce internationally known Boston, MA, banjo collector, James Bollman, as the recipient of this year’s Jack Canine Award. Named for the museum’s founder and major benefactor, the award is presented annually to a group or individual who has made a significant contribution to the promotion and preservation of America’s instrument, the banjo. Chosen as this year’s honoree by Mr. Canine himself, Bollman has demonstrated a decades-long commitment to collecting and preserving of antique banjos and ephemera.

Bollman will be recognized during the American Banjo Museum Hall of Fame ceremonies to be held on Friday, September 8th at the top of the Devon Tower in downtown Oklahoma City. Also being honored that evening as new members of the Hall of Fame will be John McEuen, Tony Trischka, Paul Erickson, Joel Walker Sweeney and Roy Clark. The Hall of Fame ceremony – which is open to the public - is just one part of the museum’s BANJO FEST weekend festivities.

“We’re absolutely thrilled to be honoring a collector the caliber of James Bollman,” said Paul Poirier, board member, American Banjo Museum. “James’ dedication to his collection and his passion for the instrument and music have driven him to put together one of the most impressive collections around. And, as a fellow resident of Massachusetts, it’s also great to be able to recognize another resident of my home state.” 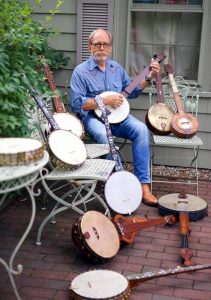 Bollman has amassed what Forbes Magazine called, “the most complete collection of 19th-century banjos and ephemera” in the country. From the rarest of minstrel-era instruments and toys to incredibly rare and valuable tintype photos. Bollman’s collection of banjo journals alone is larger than what’s held by the Library of Congress.

Collecting, studying, curating, playing and saving the instruments and related materials from this era has been Bollman’s supreme calling in life. He refers to his banjos as his “children” and even places the importance of his collection above himself.

Along with collecting, Bollman co-founded The Music Emporium, Lexington, MA, one of the premier acoustic instrument shops in the country.

Your ticket for the: James Bollman to Receive the Jack Canine Award During BANJO FEST 2017