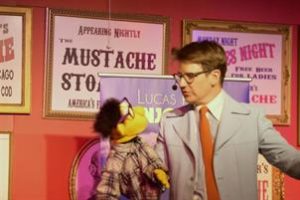 Lucas is most known for his humor on his morning television program, however; there is a whole other side to him. Ross is a banjo enthusiast, instructor and artist/musician. On Saturday, August 26, “Banjo Farm” was released with a special concert & CD autograph session. Ross began his virtual trip with his stand-up comedy & throughout the entire gig, he kept the audience enthralled on a virtual trip to The Banjo Farm. With his own puppetry skills, not to be confused with ventriloquist (as pointed out by Ross), Lucas had the entire parlor of audience chuckling. Traveling to the “farm” with Rufus, and visually seeing the baby banjo’s, was quite a treat. This event was much more than a simple CD release party. This was a banjo playing, puppet show, comedy routine, and variety show for everyone from ages 2- 100. At the end of the show, Ross assisted everyone attending in making their own banjo.

After a trip to The Banjo Farm, you realize that triangles do grow on trees, baby banjos are birthed from the ground, and accordions can swim in aquariums, but more importantly, you got the opportunity to realize that ANYTHNG can happen with magic of MUSIC.

Your ticket for the: Lucas Ross, “Banjo Farm” Album Release