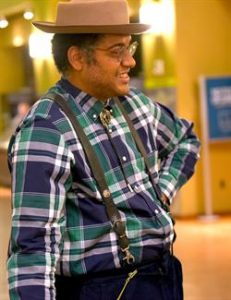 Recently, the American Banjo Museum, Oklahoma Arts Council, and Oklahoma History Center partnered to bring “Back to our Roots: An exploration of Roots Music”. This evening was a discussion of the intersections of jazz, blues, roots & bluegrass music; as well as the influence of race, emancipation and desegregation on the evolution of music throughout the United States of America.

Dom Flemons has been transplanted from his origin of birth, Phoenix Arizona, to the hills of North Carolina; however, one thing remains clear, his “roots” are those of the American Songster. At the age of 35, Dom has travelled every genre of music from blues, rock & roll to jazz, gospel and after watching a documentary of the History of Rock & Roll, a segment of the Folk revival, putting the spotlight on Bob Dylan. That segment sparked an interest as Dom dug deeper into the Folk genre. Flemons began to see that his span of musical absorption was more than just folk music. Not only did Dom began to desire to learn more about Folk music, and the styles of Clarence Ashley (1895-1967), he was introduced to the skills of bluegrass artists such as Flatt & Scruggs setting up an empowerment of knowledge of all genres of music.

With an extremely unique claw hammer style on a four-string banjo, Flemons shares that he spent countless hours researching styles of playing at the local library. “Rhythm can be heard but not seen. I had no idea that to play rhythm on a banjo you had to have 5 strings.” Flemons strums a four-string with a double thumbing style. His tuning style of playing is also unique. The “American Songster” utilizes an open G style of tuning, that he picked up from his guitar playing. Flemons is a mixer, literally utilizing traditional style of music with a contemporary approach creating new sounds to accommodate a wider audience of listeners.

It was in 2005, when Flemons co-founded The Carolina Chocolate Drops, an old-time string band. Molded with the talents, of Rhiannon Giddons, Justin Robinson, and Dom Flemons, this outstanding trio made the climb to the top, opening for Bob Dylan in 2011. In November 2013, Dom announced he was leaving the CCD to embark on his own solo career and that he HAS done.

When discussing the root ball of Bluegrass, showing progression but there are requirements of specific genres, such as the instruments and how they are played. “As long as you have those requirements, you will never get away from the roots.”

Dom shared his connection with the bones. In 2005, at the Black Banjo Gathering in North Carolina, Cliff Irvin introduced the bones and their history to Dom. Flemon’s style of bones playing is taken first hand by history of the minstrel bones. Also, a double fister, Dom shared that Irish music, is easier to play with one set of bones. His background in percussion helped him pattern different styles of rattling the bones.

Dom’s music career began with folk music and realized that storytelling is part of his traditional style of including historical context. African Americans were in the background of traditional bluegrass, just like every genre of music. Black minstrel/black vaudeville, lays very near to the heart of Flemons. Referring to Bill Monroe’s “Uncle Pen”, Arnold Schultz, a traveling migrant worker, played the guitar and fiddler. Schultz, the foundation of the Mecklenberg style of picking influenced Monroe and the extraordinaire style of mandolin playing. African American musicians were standing near the tops of the bluegrass world. “Music always brings people together going above cultural barriers”, stated Dom.

Dressing the style of vaudeville, is definitely in his bones. Flemons is a huge fan of silent movies and that is where the dress style of the American Songster began. He attempts to keep his “style”, the same so people will always know what to expect. Donning a plaid shirt, similar to the Kingston Trio, was a choice because of the simplicity of colors and ease of purchase from a regular department store. Corduroy pants gave him a dressier appearance versus blue jeans, (cuffed and pleated), but once again easy to purchase. Plus, suspenders and a hat that he first purchased in Australia. He referred to it as a Kubra, the Stetson of Australia. Iconic style sums up Dom Flemons, but after spending several hours with him, I found that there was much more to Dom than a plaid shirt, corduroys, suspenders and an Aussie hat. This man has his own rootball and he is sticking to his roots.

Your ticket for the: Dom Flemons