Johnny Baier to be inducted into 2019 Hall of Fame 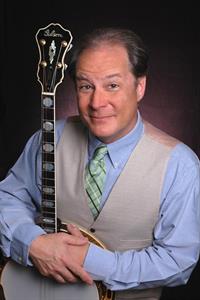 He’s been called the “banjo player’s player” and the “entertainer’s entertainer” - and this September, Johnny Baier will be inducted into the American Banjo Museum Hall of Fame. Baier is no stranger to this museum as he has served as the Executive Director since 2004, sharing his knowledge, talents and passion for the instrument with everyone who walks through our doors. Earlier this year American Banjo Museum President, Doug Parsons, sent out a letter explaining how in past years Johnny has repeatedly refused consideration to protect the integrity of the Hall of Fame process. But Doug and the Board of Directors agreed it was time to break that rule and honor Johnny for all he has done for the banjo.

Johnny Baier started playing banjo professionally at 15, just two weeks after first picking up the instrument! From “learning as he earned,” leading sing-alongs at Shakey’s Pizza Parlor in Oshkosh, Wisconsin, Baier went on to win the Canadian National Banjo Competition in 1983. He subsequently spent three years touring across the U.S. as musical ambassador for the Sara Lee Corporation, prior to settling down in Orlando, Florida. Well known as a crowd pleasing entertainer and virtuoso banjo player - placing him in the ranks of Eddie Peabody, Harry Reser, John Cali and others who inspired him - in 1988 Baier started what would be a 15,000 solo show run at Rosie O’Grady’s in Church Street Station in downtown Orlando (so it’s fitting that Rosie O’Grady’s founder, Bob Snow, will be inducted alongside Johnny this year in the category of Promotion).

In addition to Rosie O’Grady’s, Johnny’s years in Florida also saw him become a favorite at the Walt Disney World Resort performing at Disney Resort hotels, the Empress Lilly in Lake Buena Vista, the Hoop Dee Doo Review at Fort Wilderness and the Main Street Rhythm Rascals in the Magic Kingdom. Later Johnny became the entertainment director at Rock Crusher Canyon in Crystal River, Florida where he produced concerts such as Willie Nelson, Glen Campbell, Roy Clark and others as well as opening for legendary acts like The Kingston Trio, Natalie Cole, and Mickey Rooney. Baier’s ability to connect candidly with any audience makes him a favorite, whether it's at corporate events, music festivals, or off to sea. In fact, Johnny has been a headline guest entertainer aboard the luxury cruise ships of the Crystal, Silversea, Radisson, Princess and Holland America Lines and was also a featured soloist aboard the American Queen riverboat.

From the stage to the recording studio, Johnny has recorded multiple solo projects as well as appearing as featured guest on numerous jazz and swing recordings. His partnership with fellow banjo master, Buddy Wachter, resulted in the 2003 CD entitled Side By Side which was celebrated by banjo enthusiasts and hailed by mainstream critics as “quite possibly the best banjo recording ever!” In 2012 Johnny’s solo project, Pick Yourself Up, presented his unique tenor banjo and vocal styles while reintroducing listeners to the American songbook – banjo style.

Performing for years coupled with a constant commitment to learning brought with it an education. Johnny’s historical knowledge and serious journalism skills have brought him international distinction as both the editor of ALL FRETS magazine and his role as Executive Director of the American Banjo Museum. Carrying on the music and heritage of the banjo in both the printed word and outstanding museum exhibits, Johnny continues to inspire all who love and wish to know more about the banjo. This love for “all things banjo” continues to lead Johnny to amazing encounters and milestones. Whether it be interviewing actor, comedian and banjoist, Steve Martin (which Martin called one of his best ever interviews) to performing at Universal Studios in Hollywood as part of the Celebration of Life for comic banjo icon, Jerry Van Dyke, Johnny Baier continues a lifelong quest to elevate the banjo in both musicality and perception.

In recognition of his dedication to “America’s Instrument,” in addition to previously announced honorees Jimmy Mazzy, Alison Brown, John Hartford, Bob Snow and Janet Davis, by acclamation of the ABM Board of Directors, on September 6th Johnny Baier will be inducted into the American Banjo Museum Hall of Fame in the category of  Performance. Doug Parsons commented, “We - along with many in the banjo community - feel that this is a long overdue honor and are pleased to be able to recognize Johnny Baier for his lifetime of excellence.” Congratulations to Johnny Baier, our own BANJO MAN!

Your ticket for the: Johnny Baier to be inducted into 2019 Hall of Fame

Johnny Baier to be inducted into 2019 Hall of Fame