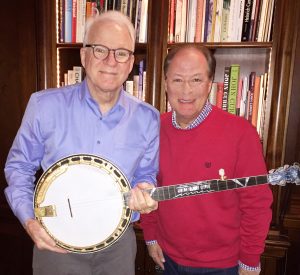 Established in 1998 by The Kennedy Center in Washington, D.C., the Mark Twain Prize recognizes people who have had an impact on American society in ways similar to the distinguished 19th century novelist and essayist best known as Mark Twain.  As a social commentator, satirist and creator of memorable characters, Samuel Clemens was a fearless observer of society, who startled and outraged many while delighting and informing many more with his uncompromising perspective of social injustice and personal folly. He revealed the great truth of humor when he said "against the assault of laughter nothing can stand."

Joining other recipients of the award including Jonathan Winters, Carol Burnett, Richard Pryor, and George Carlin among others, the 2005 recipient of the Mark Twain Prize was Steve Martin.  To commemorate the honor The Kennedy Center commissioned the Gibson Company to create a one-of-a-kind banjo which was subsequently presented to Martin.  The engraved and gold-plated banjo features a special mother-of-pearl inlays on the fingerboard depicting The Kennedy Center along with a laser etched image of Mark Twain on the resonator.  Steve Martin’s name and the date of presentation are also etched into the instrument’s armrest.  After visiting the museum in June of 2019, Martin was inspired to offer this one-of-a-kind banjo to be shared with and enjoyed by ABM visitors.

“The museum is fantastic and will be a really good home for this special banjo.” Martin said.  ABM executive director, Johnny Baier, commented, “To many people of the current generation, Steve Martin is the banjo.  Being able to display and share one of his personal instruments - a banjo which melds both the musical and comedic sides of such a beloved and respected entertainer and musician - is truly an honor for us.”

The banjo, now a part of the museum’s permanent collection, will become the centerpiece of an upcoming exhibit at the American Banjo Museum chronicling the banjo life and contributions of Steve Martin.  Along with the “Mark Twain” banjo will be rare photos and videos as well as a pristine 1927 Gibson Florentine model banjo which was part of the Steve Martin collection and acquired through the consideration of ABM board of directors member, Devin Tower.

Your ticket for the: ABM Acquires Steve Martin Banjo