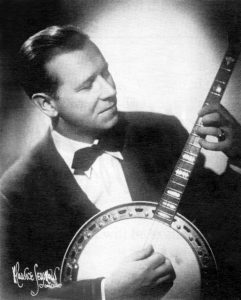 EDDIE COLLINS – A journeyman musician and Detroit celebrity, the impact Eddie Collins’ 40 plus year banjo career was felt nationally. Playing at a virtuoso level on both banjo and guitar as the instruments each came of age in the 1920s and 30s, Eddie Collins’ career hit high gear when he joined Art Mooney’s Orchestra in 1948. Touring nationally on the heels of their million selling hit recordings such as Four Leaf Clover and Baby Face, Collins’ years with Art Mooney postured him to return to Detroit a musical hero – an admirable status which he enjoyed until his sudden passing in 1972.

Your ticket for the: Dc-2018 Eddie Collins